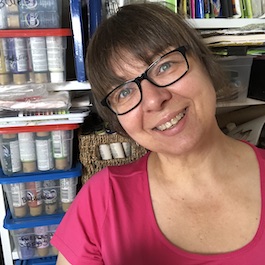 Debbie von Grabler-Crozier has always been creative. She grew up in Australia and was taught to paint and sew as a child. She painted and sewed her way through childhood and adolescence but when it came to choosing a career, she chose science first. Her training is in preventative health strategies and she has a few degrees. She left Australia in 2010 and moved to the UK but her real destination was always Germany, where she currently resides. Germany has been the ancestral home of her family for roughly 900 years! She decided that she could not leave her dog to go to work every day so she gave everything up to stay home with her. She had been a craft writer for about 15 years at this point (overlapping all of the science) and had pretty much decided that she could do as well with that as she did seeing people who needed help with their health futures. She started the next chapter of her life and lives in her favorite country, where she can be creative every day. With her dog next to her, she has written a fair few books (15 at last count) and spends her days with sewing, with her art, and just creating things. She writes for magazines regularly and operates her blog.

What Debbie loves about being creative is the realization that she is bringing something new into being. Something that was not part of the world yesterday and if it wasn’t for her, the world would never have seen the thing that she created (it doesn’t matter what it is either). And this is true of every maker. In her words: "We are filling the world with things that didn’t exist until we made them. It is a powerful thought and a happy one."

It seems we can’t find what you’re looking for. Perhaps searching can help.