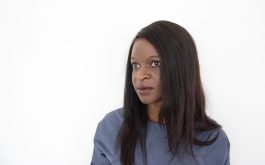 Olu started her sewing journey in 2014 when she randomly set herself a challenge to not buy any more clothes for her 2 daughters for a year. Instead, she was going to make them all with her own two hands.

At the time, Olu had limited sewing experience and did not even own a sewing machine, but she was determined to make clothes that were cool, stylish and just as good (if not better) than the clothes on the high street. To keep a record of her sewing exploits, she started a blog - Needle and Ted, which she moved over to Instagram a couple of years later. It wasn’t long before Olu caught the sewing bug and became thoroughly addicted.

Immersing herself into sewing and blogging, in 2015, Olu took her passion further by teaming up with a pattern cutter and launching Madeit Patterns, a UK-based pattern company who specializes in modern, slightly edgy and thoroughly irresistible sewing patterns for kids and adults. After 7 successful and thoroughly enjoyable years, Olu and her partner at Madeit Patterns closed their business to go their separate ways. Olu now teaches sewing workshops to GCSE textile students in secondary schools and is in the process of setting up her own sewing school to spread the joy of sewing and to push the standards of craftsmanship beyond one's own expectations.

Nine years on from her challenge, Olu is still sewing all of her daughters' clothes and for the past four years all of her own clothes too.

It seems we can’t find what you’re looking for. Perhaps searching can help.